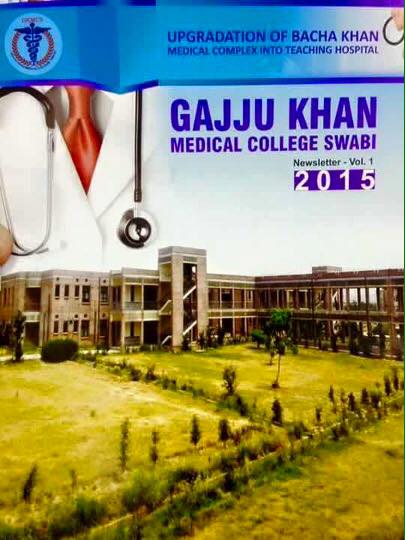 Classes at the newly-built Gajju Khan Medical College, Swabi, will start next month and around 100 male and female students would form its first batch.

This was announced at the inaugural ceremony of the college, which was held in Bacha Khan Medical Complex (BKMC) here on Saturday. The ceremony was attended by GKMC faculty, officers of the health department, faculty of Khyber Medical University, Peshawar, parliamentarians of different political parties and project director Dr Jehangir Khan.

The college is named after renowned Pakhtun leader, Gajju Khan Baba, who ruled Pakhtunkhwa for 35 years after the passing away of Malik Ahmad Khan in 1513 AD. His mausoleum is situated near the college.

Initiated by the previous ANP-led government, the GKMC project has been completed with a cost of Rs460 million.

Classes to start next month

Mutasim Billah, provincial additional health secretary, said that the Khyber Pakhtunkhwa health department would spend Rs11 billion on development of the health facilities in the province in the current financial year.

He said that 164 specialists, 395 doctors and 1,500 paramedical staff would be appointed soon and they would take charge of their duties in next two weeks.

“It has been planned that the entire district headquarter hospitals (DHQ) in all 25 districts of the province would be fully equipped,” he said.

Prof Dr Iqbal Begum, principal of the college, said that the major objective of the college was to provide contemporary medical education to the students in the environment that offered professionalism.

She demanded that BKMC should be further equipped with modern equipment and turned into a 1,000-bed hospital because it had been converted into a teaching hospital. On this occasion, Helping Hand, an NGO, donated equipment worth Rs15 million to BKMC.