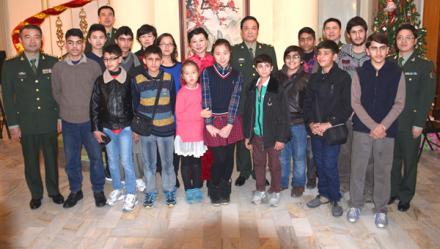 The second group of students belonging to Army Public School (APS) in Peshawar left on Thursday night for China for an educational and recreational tour as part of a rehabilitation programme.

According to the ISPR, during the 10 day long visit, students accompanied by parents and teachers will visit major Chinese cities including Beijing, Shenzhen, Gongzhour and Hongkong as well as witness historical sites.

Before their departure to China on Thursday, the Chinese Embassy in Islamabad had arranged a reception for the APS students, their parents and teachers. Chinese hosts at the Embassy accorded a warm welcome to the students at the reception.

Major General Qi Huajun, Naval and Military attaché at the Chinese Embassy while speaking on the occasion said that Pakistan and China were time tested friends and that people in China were deeply aggrieved after the APS terrorist attack and loss of innocent lives.

He added that the visit aimed to express the resolve of Chinese people that they will always stand with their Pakistani brethren in thick and thin.

The first batch of students who travelled to China arrived back to Peshawar last week.