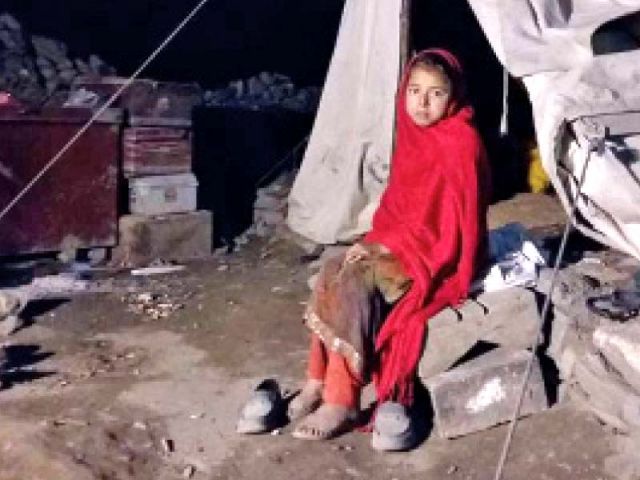 For 10-year-old Nosheen Bibi, losing a schoolbag and its contents are the primary concern. On the other hand, her family worries about a roof over their heads as winter approaches Chitral.

“My bag had books, pens and notebooks; all of those were lost when our house collapsed,” says Nosheen from Jughoor village in Chitral. “I searched for it (the bag), but the roof and all the walls collapsed on my school things,” she tells The Express Tribune over the phone.

Nosheen’s house had two rooms, both of which were completely destroyed during the October 26 earthquake that shook parts of Khyber-Pakhtunkhwa. Presently, she and her five-member family are living in a tent provided by the government.

The girl is the elder daughter of Wahidullah. Being the offspring of a labourer, things like schoolbags are a luxury for Nosheen. With her thirst for education, she has been left in a state of despair when not only her house, but also her school turned to rubble.

While Nosheen is worried about her education, her father Wahidullah says the family is living in a tent and does not have the ability to save itself from the harsh cold. “I cannot afford to reconstruct my house,” he says. “My children will be unable to bear the cold in this tent; snowfall has already started in the surrounding hills.”

He urges the government provide them a hard shed on an emergency basis as the current one does not fulfil their needs. He says Nosheen is very keen about her education. “When the earthquake destroyed our house, we were worrying for shelter but she was crying for her bag and books.”

In Ghughoor village, around 100 houses were fully destroyed and a girl of Nosheen’s age, Zarshee, died in the quake.

As per a Provincial Disaster Management Authority report, Chitral is one of the worst affected districts in which at least 32 people died and 200 were injured. The report shows that families of 32 deceased and 30 injured people have been compensated thus far.

However, a local tells The Express Tribune over the telephone few of the injured have received compensation, while thousands of survivors are still living in miserable conditions.

“Around 100 out of 500 houses in this village, located near Chitral city, have been completely destroyed,” reveals Idress Jamal from Jughoor village. “If people of this area [which is near the city] are living under miserable conditions, one can only imagine the state of those further up the hills.” He adds snowfall has started around the Lowari Pass area and the road will also be closed after a few days, leaving people stranded. “How will they fulfil their requirements?”

He appeals to the federal and provincial governments to help them reconstruct their houses and fulfil their needs otherwise they could die frozen and starving.

PDMA Spokesperson Latifur Rehman says that so far, Rs0.6 million have been distributed among families of the deceased, Rs0.2million among critically injured persons and Rs10,000 for those with minor injuries.

He adds people living in the hilly areas have been directed to shift to government school buildings so that those likely to be affected by winter can be accommodated.