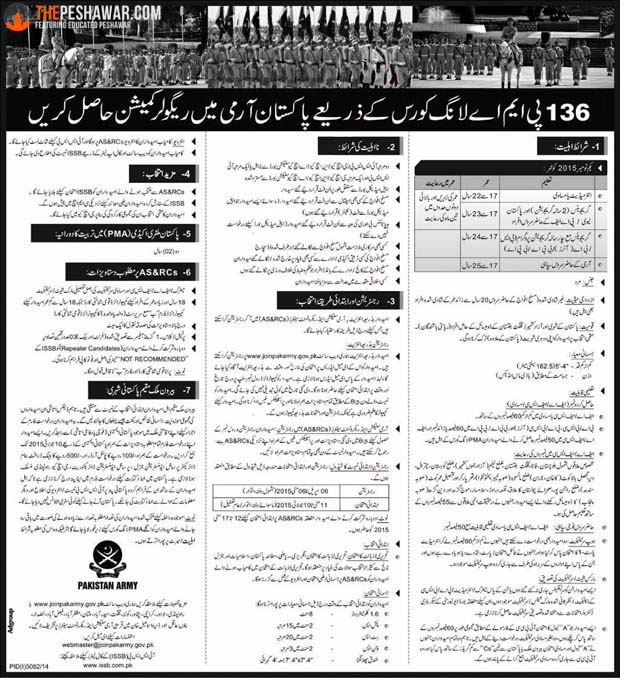 Share on facebook
Share on twitter
Share on linkedin
Share on whatsapp
This Course Commissioned Officer through 136 PMA Long Course has been announced by the Pakistan Army. Advertisement of this course has been upload on this page. All information of this course has been cover in this post. You can apply online registration of PMA Long Course 2015 by click on the given link below. After apply or registration of this PMA LC you can check your registration stats by entering your CNIC. And download online roll number slip.
This is a good opportunity for all who are well educated and want to serve the nation by joining Pak Amry or Defense force. So apply as soon as possible for this post by following how to apply procedure given below.
Pakistan Army, www.joinpakarmy.gov.pk, PMA LC, Join Pakistan Army 2015, Pak Army Jobs 2015, PMA 136, 126 PMA Long Course, PMA Long Course Registration 2015, PMA Advertisement 2015, 136 PMA Roll Number Slip, Pak Army Roll Number Slip, PMA test Date,
Schedule  of  Registration  /  Preliminary  Tests:
Registration  and  Preliminary Tests will be held as per following schedule:-
Registration :  06 Apr – 06 May 2015 (Including Saturdays/Sundays)
Preliminary Tests :  11 May – 10 Jul 2015  (Except Saturdays/Sundays/Closed Holidays)
Note:  Repeater  candidates  must  report  at  concerned  AS&RCs  from  12  –  17  May 2015 for preliminary tests.
Further Selection:
Candidates who are selected by AS&RCs will be called for ISSB Test. Medical examination of ISSB recommended candidates will be carried out at nearby CMHs. The final selection will be made at GHQ on the basis of candidate‟s
Performance:
Training Period at Pakistan Military Academy (PMA).    2 Years.
Documents Required at AS&RCs:

Eligible  candidates  residing  abroad  are exempted  from  Preliminary  Selection.  However,  Defence  Attaches  will  ascertain  their  overall suitability, physical deformity and stammering aspects. The candidates are advised to approach Pakistani  Embassies  (Military/Defence  Attaches)  in  the  country  where  residing  for  issuance  of Application  Forms.  They  will  submit  their  Application  Forms  alongwith  connected  documents through Pakistani Embassies by 10 Jul 2015. A postal order of Rs. 100/- and a Bank Draft of Rs. 500/-  in  the  name  of  Director  General  Personnel  Administration,  Personnel  Administration Directorate,  GHQ  Rawalpindi  will  be  attached  with  the  Application  Form.  Postal  address  in Pakistan should also be indicated in the Application Forms so that call up notice for ISSB Tests/ Interviews and further correspondence to eligible candidates can be made on the given Pakistani address. No traveling allowance will be admissible for travelling to and from Pakistan.

Note:-If selected candidates for current entry are more than the required induction, the left over candidates would be considered for next PMA Long Course entry subject to fulfillment of eligibility conditions / merit.