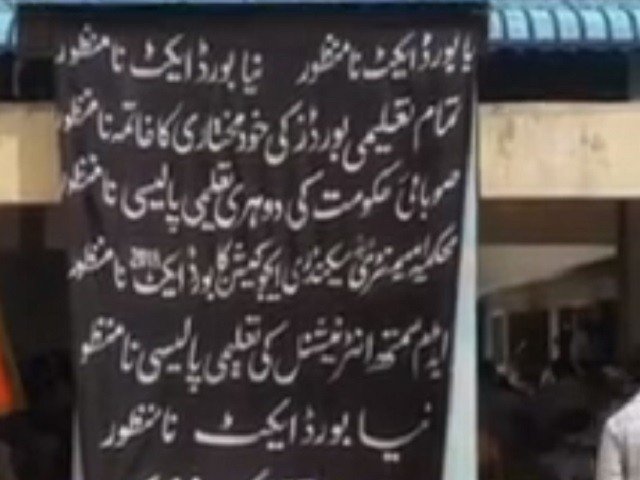 Employees of all seven boards of intermediate and secondary education in Khyber-Pakhtunkhwa called off their week-long strike after K-P Assembly Speaker Asad Qaisar assured them on Tuesday that their concerns will be addressed at the earliest.

However, annual examinations of intermediate students, scheduled to commence from April 20, have been postponed by five days and will now start from April 25, Chairman Board of Intermediate and Secondary Education (BISE) in Peshawar, Dr Fazal Rehman later confirmed.

Employees of all seven education boards across the province were on strike for the last one week, calling to reinstate the previous education bill as they considered that the proposed bill will challenge the autonomous status of the education boards.

Meanwhile, students and their parents suffered, visiting the relevant boards repeatedly to get roll number slips for upcoming intermediate and secondary education examination, which were previously scheduled for April 20.

After boycotting duties for a week, the protesting board employees today met K-P Assembly Speaker Qaiser at Pakhtunkhwa House in Islamabad and apprised him in detail about their reservations regarding the proposed bill for the restructuring of the BISE.

The speaker assured them that the bill would never even be tabled in the provincial assembly let alone being passed by the lawmakers before all stakeholders particularly employees of all boards were taken into confidence and their grievances properly addressed.

The K-P speaker also pointed out that draft bills are generally sent to the selected committee for review before being tabled in the assembly. This is done so that all proposals in the draft are properly examined and input of all stakeholders is properly solicited, he added.

However, in the present case, Qaisar pointed out that as examinations are scheduled, therefore grievances of the employees will be addressed first before deciding the fate of the proposed bill. He further added that grievances of the protesting staff will even be taken care by the newly-elected lawmakers as tenure of the present assembly is about to end soon.

The protesting staff appreciated the gesture of the K-P speaker and announced to call off their strike.

Speaking to reporters later, Chairman BISE in Peshawar Dr Fazal Rehman said the decision regarding postponing the exams was taken in the wake of strike by employees of the education boards. He said though the strike by BISE employees has been ended today, but it was impossible to supply examination material including stationary to all exam centers of the province in time.

Therefore, it has been decided to postpone the exams for five days, he reiterated.

Meanwhile, Education Board Union President Dr Muhammad Alam also confirmed that the strike has ended as “our demands have been met”.