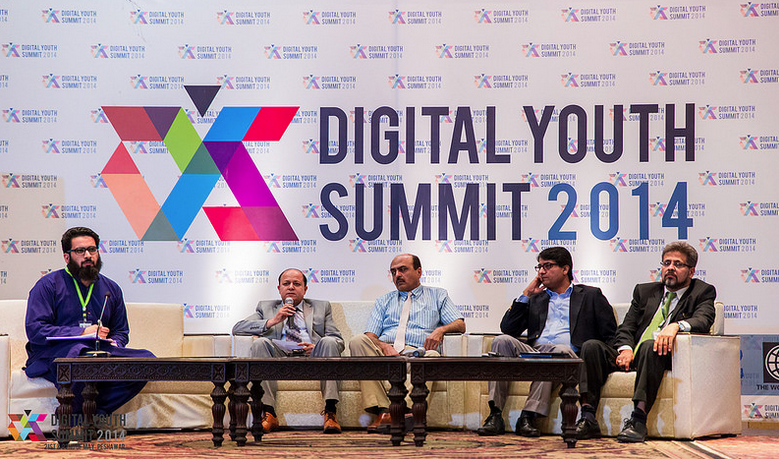 The Digital Youth Summit successfully kicked off in Peshawar on 21st of May 2014. It is arguably Pakistan’s largest tech expo and conference which has been organized by Peshawar 2.0, Khyber Pakhtunkhwa IT Board and the World Bank.

The opening ceremony started at around 10:00 am with the (designation) Sidqiullah’s speech. While thanking the speakers, organizers and audience for taking keen interest, he shared his views on the virtual world. Freelancing, for instance, he mentioned that Pakistan is currently ranked number 3rd in the world with India and USA at 2, and 1 respectively. With Pakistan’s massive ratio of youth, he specifically asked them to attend such events and use it brush up their skills and take on the market themselves.

His speech was followed by that of Dr. Faisal Khan of Peshawar 2.0. He gave the audience with the information about the structure of the event, the vision of Peshawar 2.0 and how this event is a valuable opportunity for the youth as startups from all over Pakistan are attending the event.

He stressed on the fact that the youth of Pakistan and specifically of KP should analyze and innovate so the next multi-million dollar company can be raised from Pakistan. He mentioned that Peshawar 2.0 have outstanding mentors who will be more than happy to help those who are looking for guidance.

Senior Minister for Health Shehram Khan Taraqai was next in delivering a motivating speech specifically aimed at the youth. He said, “First time in the history of Pakistan, Digital Youth Summit is happening in Khyber-Pakhtunkhwa.” He further stated that the government will facilitate the youth by arranging such events but its then the job of the youth to learn from the experience and then implement it further on. He said that there are many hurdles that can hinder the progress of the country but technology is one field that can counter those hurdles hence the youth should take it seriously and try to step up while the government will provide them opportunities to do so.

Minister for Education Atif Khan who was ecstatic about the Digital Youth Summit. He said, “The government of KPK is serious in bringing the change they promised before elections.” He further on stated that the youth of Pakistan and specifically that of KP can be a role model for the whole world by not backing out and trying to move forward despite the security situation in the country. He said that the world should see this face of Peshawar, and that everyone can make a difference no matter how hard the situation gets.

The opening ceremony was followed by a panel discussion on innovation. In the panel were Khalid Khan department of Higher Education, Azam Khan, M.Ali, Azhar khan.. The discussion kicked off on innovation in Pakistan. The start was not really bright for the said concept as Mr. Khali Khan stated that in 2008, the first survey on innovation was conducted and the result was that most of the people had no idea what innovation is. The other speakers did not differ much and the overall picture was much clear – Pakistan is lagging in innovation. The panel moderator Dr. Faisal hence focused on the barriers or problems that exist in innovation. Khalid Khan mentioned the communication deficiencies as a prime reason whereas Azzam stated that people studying abroad should come back to boost the innovation sector and prasied Dr. Faisal as he himself did that. As a solution to this, Mr. Azhar said that it is important to fail once in order to become successful.

He stated that failure is considered as a black mark on a career whereas in reality it is a learning curve which benefits the individual a lot. Inter-disciplinary education is another aspect that Dr. Faisal asked the panelists and which was appreciated by everyone including the audience and strongly supported the idea. Upgrading the curriculum also came under the light and it was said that the industry should also take part in helping upgrade the curriculum according to the market.

The panel was followed by breakout sessions on fostering an ecosystem, FABLABS and maker-movement & a coding session.

The FABLABS session hosted a speaker from Nepal by the name of Sanoj . The idea of FABLABS, maker space and hacker space was thoroughly discussed. FABLABS is basically a lab containing advanced tools for the students to use to their advantage. This may include laser cutters, 3D printers, CNC routers etc. Maker-space is more related to the manufacturing processes while hacker-space is set up to boost creativity and people can come up with solutions to different problems. Coding session was about HTML and computer languages and it was generally observed that audience took keen interest in that particular session.

The second panel discussion was about online work and hosted panelists including Cecilia Guilford, WiliMiettinen, Tashfeen Ahmed and Farrukh Malik. It was moderated by Saad Hamid. Tashfeen Ahmed of LUMS shared his story of how he was fascinated by games and it led him to the field of online work. He now runs a company Tashfeenism for freelance candidates. Wily mentioned his company of Microtask which basically distributes small tasks on the internet for freelancers to work on.

He said that the interested people can contact their representative in Islamabad and so can get in touch with them and get access to online work. Cecilia mentioned how they are trying to help youth grab local opportunities in order to get access to the global ones. But on the same time, there are many barriers to online work which may include the culture, policy making and the global demand. Therefore it is imperative for the government to be aware of the situation and hence provide the opportunities for the youth to thrive.

She further added that she have organized many training sessions in different countries in order to spread awareness about this phenomenon. The discussion was continued by Farrukh who mentioned his story and how freelancing can help the unemployed as well as the employed youth. He stressed that if someone has a job, he can convert his passion for a particular thing into a money-making freelancing task. He stated that every individual is unique and has a talent, it is up to the youth to recognize it and then utilize it in the right way.

The breakout sessions for the second panel included blogs, paying online, staying safe, proposal writing, and many more relevant topics. The discussion from the panel was basically carried on in different capacities and by engaging the audience in constructive communication. Many people were skeptical about the security of online work. Their doubts were cleared in the staying safe session where all the valuable tips and tricks to protect the privacy were shared. In a nut shell, online work was explained in great detail with no aspect left untouched. The Youth summit will be ended today.