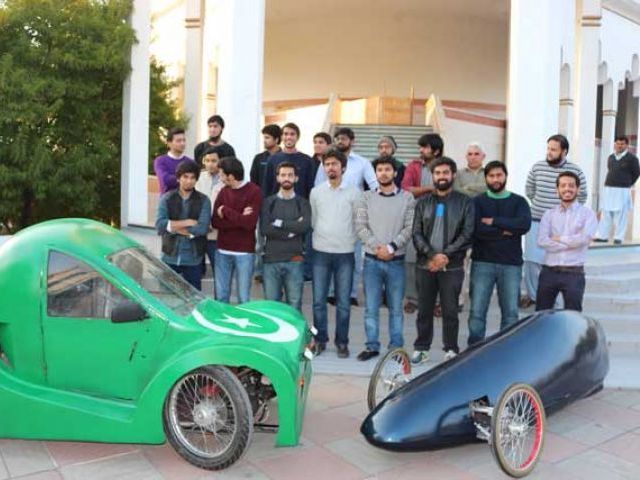 PESHAWAR: Ghulam Ishaq Khan Institute (GIKI) of engineering sciences and technology students manufactured vehicles that were showcased in their institute for media persons on Tuesday. Nine teams including two teams from GIKI – hammerhead and urban concept category – will be representing Pakistan and demonstrating manufactured vehicles in the Shell Eco-Marathon in Manila in March 2016. The street circuit in Manila will provide the teams with an urban setting to stretch the boundaries of fuel efficiency.
Team hammerhead
Talking to The Express Tribune, Jafery, a participant, said he realised the importance of energy versus economy in Pakistan. “This is what urged us to take part in the Shell Eco-marathon and the competition of our vehicles has made us more enthusiastic about the idea,” he said. Jafery added Shell Eco-Marathon will provide them with a platform to convey and to make a contribution to their country.

He also said the most common fuel being used in Pakistan is CNG which is not readily available in the northern areas throughout the year.

Team hammerhead technical head Burhan Shabir said projects like Search Engine Marketing (SEM) bring innovation in the spotlight and it is in the spirit of this competition that we were able to conceive the idea of a car running on electric batteries. “The model was gasoline powered and the reason we switched to electrical batteries was the constant need of producing more energy globally,” Shabir said. He added the car does not run on fossil fuel, is environment friendly, cost-effective and a prototype for future green energy.

Team hammerhead sponsorship head Farhan Hassan said Shell Pakistan organised technical and safety inspections and supported their work throughout. They arranged a competition, Run for Your Money, in order to assess our progress and bring us at par with competing international teams. “We won first prize – Rs1 million in the initial pre-SEM assessment which persuaded us to take this step forward,” Hassan said.

Another member, Amaduddin Gakhar, said the new car has been modelled on Computer-Aided Design (CAD) software and through several iterations has been optimised to give maximum fuel efficiency. “Moreover, the new shell has been fabricated using carbon fibre which enhances efficiency by reducing its total weight,” he said.

“The uproar regarding the oil prices and its sudden rate of depletion is one of the prime reasons for our participation in this competition,” Urban concept category team head Arsalan Abeer told The Express Tribune. He said Shell Eco-marathon will reveal the youth is ready to tackle stiff challenges faced by Pakistan by either decreasing fuel usage or shifting to alternative fuels.
Abeer said the design of their car was inspired by a dolphin. “We have tried to incorporate dolphin’s speed and efficiency in the face of resistance,” he said. “The car is made from local parts hence it is suitable for mass production.”

Shell Eco-marathon is a four-day student innovation competition that challenges students from universities across the world to design, build and race the most energy efficient cars. For 2016, 140 student teams from 18 countries across Asia, Australia and the Middle East registered in two different vehicle categories – prototype (aimed to build the most aerodynamic and fuel-efficient vehicle possible) and urban concept (aimed to build fuel-economic vehicles that resemble modern cars).