Home / News and Events / I am not Malala launched

I am not Malala launched 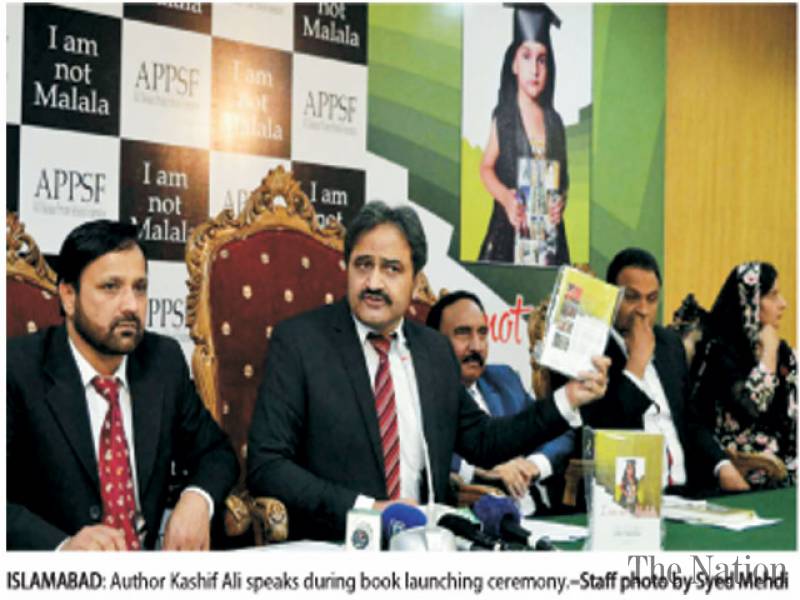 I am not Malala — a strong rebuttal of Malala Yousufzai’s memoir ‘I am Malala’ — was launched yesterday to counter the narrative. The youngest recipient of the Nobel Peace Prize Malala Yousufzai’s book “I Am Malala” was published in October 2013 that was co-authored by British journalist Christina Lamb. ‘I am not Malala, I am Muslim, I am Pakistani’ is a story of gallant Pakistani daughters and sons who take pride in being Pakistanis unlike Malala who saw no positivity in Pakistan, said the author of the book, Mirza Kashif Ali, President All Pakistan Private Schools Federation (APPSF).

“The book is written with the aim to reveal the truth and counter anti-Islamic propaganda and expose the nefarious designs of anti-Islam forces,” he said. The association that represents 173,000 private schools including the elite schools systems had banned Malala’s book last year in all private schools and colleges terming it highly ‘controversial’. The APPSF believes that the contents of her book carry highly objectionable and derogatory narrative regarding Islam, Quranic Injections, Holy Prophet (PBUH), ideology of Islam, Pakistan Ideology, Quaid-e-Azam Muhammad Ali Jinnah, Pak Army, history and others and support sectarianism.

The association is going to move the court on November 13 to ban “I Am Malala” across the country, they announced. Terming Malala darling of the West and Shiv Sena, an Indian far-right regional political party, Kashif said those who created al Qaeda and ISIS created Malala. Kashif questioned Malala’s father Ziauddin Yousafzai’s appointment as education attaché in Pakistani mission in Britain and UN, claiming he is a convict of wearing black armbands on the 50th anniversary of Pakistan.

The book that conducts point by point rebuttal of the book as well as Malala and her father’s statements explains why it is necessary to say or write “Peace Be upon Him (PBUH)” with the name of the Holy Prophet Muhammad (PBUH) and why it is banned in schools. It questions the world for showering Malala Yousafzai with awards including Nobel Peace Prize saying the principal of Army Public School who scarified her life to save her students deserves more laurels. It says the students of the schools are true sons and daughters of the soil who despite the massacre of 132 schoolchildren by the Taliban have been going to the same school and did not opt to get nationality of any other country as did Malala.

It also praises Aitizaz Hasan,a student from Hangu who saved his schoolmates and laid his life while tackling a suicide bomber who had come to attack his school. The book terms Yousafzai a double agent, electricity thief, and a traitor because of his demand to hand over Shakil Afridi, who ran a fake vaccination campaign with the support of CIA to gather DNA samples to hunt Osama Bin Laden, to the US.

The book tries to establish that focus of Malala was army bashing under the cover of female education. She drew similarities between the Army and the militants and was not happy even after the restoration of the peace in Swat Valley of Pakistan. Kashif said Malala has termed Satanic Verses – the book of Indian origin British novelist Salman Rushdi – as freedom of expression and never uttered a single word of condemnation against the blasphemous sketches. He said the book also questions why she never uttered a single word of condemnation against Israeli aggression or brutality in Gaza when she spoke against the atrocities of Boko Haram in Nigeria. He drew conclusion that it was because of her loyalty with Jews and her western masters.

“She has formed strong nexus with Salman Rushdie and Bangladeshi writer Tasleema Nasreen, and also believes in their ideology,” he alleged. “Malala says that she does not fear the Taliban any longer but will she return to Pakistan if she has no fears?” he questioned. “She will never do so because she will lose support of her masters and the easy money flowing in,” he further alleged.

Kashif said the APPSF went on a countrywide strike when Malala was attacked and the entire staff and students of private schools expressed solidarity with her. “We are not against her but the ideology being imposed on us by such traitors and billions of dollars of Malala Fund are being used for this to introduce secular curriculum.”