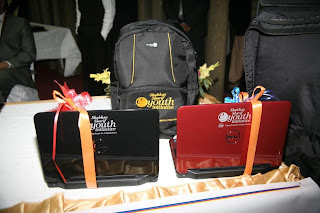 The Governor also granted the provision of higher secondary School in central Orakzai Agency and directed the authorities concerned to submit the proposal without delay.

He said that brilliant students having IDP status will also be awarded with laptops.

He said that in order to keep the educated youth of the society connected with world, the laptop provision scheme was launched and we are committed to ensure the provision of best possible modern education facilities to the FATA students. He said that in this connection, laptop scheme for the academic year 2014 has been launched and would be extended to the whole federal Administered Tribal Areas under a phased program. He said that laptops were also being distributed among talented girl students of remote and deprived areas to encourage female education. He said that education is the top priority of our government and we are fully committed to support and encourage the talented students of FATA and Khyber Pakhtunkhwa.

Governor said that, particularly the tribal region, was confronting the challenges of insurgency and terrorism. The only way to overcome these threats is education and the youth should be educated in line with the modern day requirement. He said if appropriate path was given to the young generation, our youth could bring the country to the forefront of developed countries within a short span of time. He said and urged the students of FATA to concentrate on their education, adding that students were the asset of the country. He said that they should get knowledge in a way that enabled them to serve the country in future.

PESHAWAR: A representative delegation led by Malick Amanullah from North Waziristan Agency called on the Governor Khyber Pakhtunkhwa Engineer Shaukatullah here at Governors’ House Peshawar on Friday. The delegation apprised the governor regarding the problems and difficulties confronted by the tribal people in North Waziristan agency. The governor assured the delegation of taking necessary action to address their grievances.

PESHAWAR: : A representative delegation led by Ex Senator, Haji Noor Shair Afridi from Dara Adamkhel called on the Governor Khyber Pakhtunkhwa Engineer Shaukatullah here at Governors’ House Peshawar on Friday. They remained some time with Governor and discussed the matters of common interests.