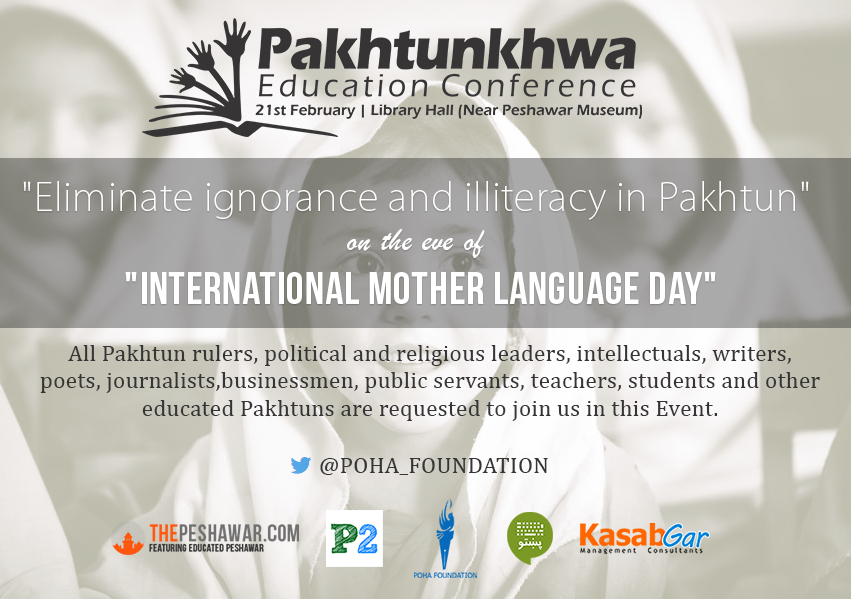 This event is organized with an aim to “eliminate ignorance and illiteracy in Pakhtun” on the eve of “International Mother Language Day” (21st February, 2015)

Pakhtuns have often been in a state of anarchy due to internal uprisings and foreign interventions. They lagged behind in almost all spheres of life including education. Some Pakhtun rulers and reformers tried to educate their people but were resisted by the rivals of the time, some partly succeeded while others did not even try to do so. In post Islam history of Pakhtuns, Bayazid Roshan was the first leader who not only realized the need of education but also practically established schools for educating Pakhtun men and women in 16th century. Pashto alphabets prevalent today were formally introduced by him. He was opposed by Mughals and their crony, Akhund Derweza, in the name of religion. His books were burned, his relatives were killed and his followers were persecuted.

In 1920s, Afghan King Amanullah Khan sincerely tried to educate people but his plans were labeled as anti-Islamic by the English and their agents. His British sponsored opponents had many demands including closure of all schools and establishment of exclusive British embassy in Kabul. He was forced to abandon not only education but also his throne.

In 1930s, Bacha Khan tried his best for promotion of education in today’s khyber Pakhtunkhwa. He established a school and preached benefits of education. He was arrested and imprisoned for three years by the British rulers though British themselves established many schools which produced thousands of educated Pakhtuns.
In late 1970s, Afghan socialist rulers launched mass education movement but this movement was labeled as anti-Islamic by the liberal West and its “Mujahideen”.

Ironically today too getting modern education has been declared unislamic by Molvis and schools are blown by militants only in Pakhtun areas of Afghanistan and Pakistan. Both governments of Afghanistan and Pakistan are making efforts to educate Pakhtuns but their efforts have been less fruitful. Lack of education left Pakhtuns in a state a ignorance, poverty, war and deprivation which ultimately affected their neighbors too.

POHA is launching Mass literacy and education movement this year. Mission of POHA is to engage all stakeholders for making effective and coordinated efforts to promote literacy and education for children, youth and adults. Though we face opposition while educating our people yet we now have various opportunities to work for education. There are thousands of educated Pakhtuns who if persuaded can educate those who are illiterate.”

All Pakhtun rulers, political and religious leaders, intellectuals, writers, poets, journalists,businessmen, public servants, teachers, students and other educated Pakhtuns are requested to join us in this Event.