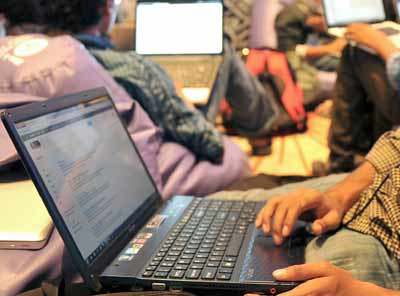 Special Assistant to Chief Minister for Higher Education Mushtaq Ahmad Ghani told The Express Tribune on Tuesday the initiative was replaced with an endowment fund which will provide financial assistance to indigent and talented students for admission in reputed institutions of Pakistan.

“There are competitive candidates who face difficulties getting into colleges despite their talent. The K-P government has set up the fund for this purpose after closing the Naway Sahar scheme.” Earlier, at a meeting at the Civil Secretariat, Ghani had explained, “All educational institutions and their sub-campuses will be provided the funds along with other resources.”

Around 23,400 laptops were distributed across Khyber-Pakhtunkhwa (K-P) so far, shared Additional Secretary Higher Education Department Khalid Khan. “Anything in the shape of an investment should be for the education department; it’s the need of the hour,” added Khan.

Explaining the pros and cons of the project, Khan explained the endowment fund is divided into three parts. Rs300 million will be used to provide income and profit to bachelors students in need of financial assistance who are enrolled at various institutes within the province. Of course, Khan added, they would need to fulfil merit criteria which will be chalked out later.

Similarly, Rs500 million has been set aside for students who are studying in established educational institutions such as the Institute of Business Administration and Lahore University of Management Sciences. Additional Secretary Khan added another Rs500 million will be used to provide a stipend to the jobless youth, including fresh graduates. Priority will be set according to population, financial means and a few other aspects – this criteria is yet to be finalised.

Another official of the department wishing to remain anonymous considered the laptop scheme to be a “flop”. Money invested in that project was like money down the drain; it did not serve any purpose, he stated.

On July 13, 2012, the ANP government approved the initiative to distribute laptops among talented students. For the purposes of Naway Sahar, the Project Management Unit at the Higher Education Department was tasked to implement the scheme as an additional responsibility.

On June 9, 2012, the then provincial government took a page from Punjab Chief Minister Shahbaz Sharif’s book and earmarked its own Rs1 billion free laptop scheme in the budget for the fiscal year 2013. The target was to distribute 25,000 laptops to top students in K-P.

Say no to free computers

Sabihul Hasnain, Bachelors in Social Science student at the University of Peshawar, appreciated the Pakistan Tehreek-e-Insaf (PTI) government’s move away from Naway Sahar, terming the scheme “a burden on the national exchequer”.

Hasnain said he witnessed many of his colleagues selling the laptops given by the government at a profit at Gul Haji Plaza, a major trade centre in the city. “It became a business for students and didn’t fulfil the educational purposes for which the laptops were given.”

The student went on to criticise a similar initiative the PTI launched; handing out tablets to students. Hasnain said the youth were still ignorant of the potential of such technology, so in essence it was just another burden on the government’s purse.