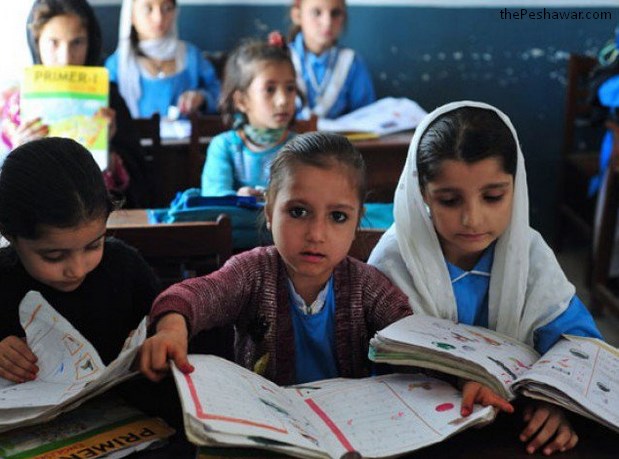 The Khyber-Pakhtunkhwa (K-P) Text Book Board has prepared and distributed revised textbooks for the upcoming academic year after coalition partners PTI and JI agreed to syllabus changes after months of intense deliberations.

JI had raised certain objections over the curriculum approved in 2006. The religious party argued “Islamic chapters” had been removed. It also asked that “objectionable” material be removed and 18 Quranic verses be added to the grade nine chemistry textbook. The party had also recommended that first graders use the greeting Assalam-o-Alaikum instead of Good Morning at schools.

In addition, the JI had expressed reservations over images in grade four science textbooks, saying girls were shown in the material without their heads covered. The party also demanded that chapters on Raja Dahir and Ranjit Singh be excluded from the grade eight Pakistan Studies syllabus.

K-P Textbook Board official Mutahir Khan shared around 5% of JI’s suggestions were accepted and implemented by the K-P Directorate of Curricula and Teacher Education (DCTE). The rest of their objections were addressed through mutual consultation, he said.

After several meetings between the K-P government, JI and DCTE officials, the changes were finalised, added Khan.

Now the books have been prepared and distributed among schools across K-P.

About the new changes, Khan said the cover pages of books included verses of Surat Al Hujurat and anti-corruption slogans, replacing the ‘we want peace’ message. The said chapter of the Quran speaks about acceptable conduct for Muslims.

He added a chapter on Allama Iqbal replaced one on Helen Keller in the grade ten English book. A chapter related to the services of late JI Ameer Qazi Hussain Ahmed and late Hayat Khan Sherpao were included in the class nine Pakistan Studies book. DCTE Director Bashir Hussain Shah said the provincial government had discussed in detail all of JI’s suggestions and were in agreement. He added the revised books would be taught in the new academic year which kicks off from the beginning of April.