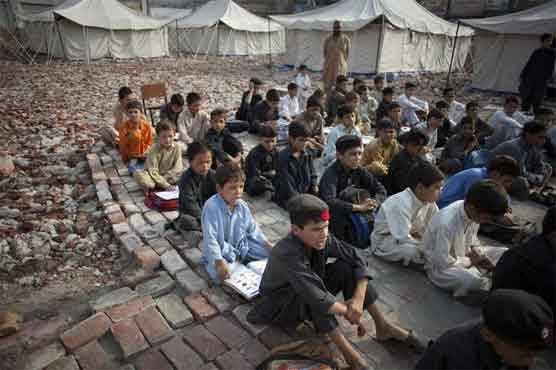 A one day education seminar titled “Tameer-e-Taleem Si” held on Monday by Islami Jamiat Talba (IJT) in Peshawar Press Club and urging provincial government to make required reforms in order to improve education system and increase budget for it.

Provincial general secretary in his address said in today’s world special concentration to be given to education and the provincial government should make reforms for bringing improvement in education system. The KP government, Shabeer said should enhance annual budget of education.

Urging the federal government to conduct elections for talba unions in the country as problems in education institutions would be generated owing to absence of unions, he remarked. Zubair Hafeez in his speech said that very limited people get higher education in the country due to enforcement of around 36 kinds of education system in Pakistan.

He suggested government to take drastic efforts for introducing equal education system in country. Sohail Ahmad provincial Nazim of IGT claimed his union was fighting against ignorance and left no stone unturned to work for the wellbeing of students in educational institutions across the country.

IJT to make referendum today across the province against increase in fees and slip finance scheme and highlight other important problems, he said and adding till the end of driver on 27, November, a Tahmeer-e-Pakistan rally would be taken out in KP. Mian Saheed Uddin and Abid Ullah Shaheen also delivered speeches later on.

PPI adds:?Speakers at a seminar on Education have urged the Khyber Pakhtunkhwa government to take serious steps for introduction of a uniform education system, resolution of the students issues, and to ensure provision of facilities at the public sector education institutions in the province.

The seminar on titled Promotion of education for Development was arranged by Islami Jamiat-e-Talba Khyber Pakhtunkhwa here at Peshawar Press Club on Monday. The Jamaat-e-Islami General Secretary Khyber Pakhtunkhwa, Shabbir Ahmad Khan, was presided over the seminar, while the Provincial Minister for Information, Shah Farman, who invited as chief guest, didnt attend the event, due to his busy scheduled.

While highlighting the students issues during the seminar, the peakers viewed that the education is playing key role for brining positive change in the society. They further added it was essential to make serious efforts for promotion of quality education, along with provision of facilities at the education instutitions in the province.

The participants demanded of the government to make serious measures for introduction of uniform education system, promotion academic and research activities at the education institutions. They also demanded to abolishing of self-finance scheme, and revival of students unions.

Later, addressing the seminar JI KP General Secretary, Shabbir Ahmad said that youth has integral role in social and economic development of the country. There are host of challenges being confronting the country, which can only addressed by promotion of education. He said that youth has the potential to meet the increasing challenges of the country, but there was only needed to create awareness among them about all those issues.

Commenting the current political and current scenario, Mr Shabbir said that Pakistan has yet to be independent economically and socially. We are still waging war for independent and recognizing as sovereign state, he added. He observed that the country sovereignty and territorial integrity was challenging by the external force, while the rulers have become puppet and following the foreign agenda, he maintained.

We need to use modern technology as counter-productive against any foreign aggression, and avenge all such attacks, which are challenging our sovereignty and territorial integrity, he remarked. US has become economically bankrupt, as now Chinese economy is much higher than the United States, which was posing great challenges for the America in the economic front, he added.

He blamed the rulers for making the Pakistan as a slave nation. He stressed the need for making serious efforts for promotion of meaningful education and equipped youth with modern technology, to meet the increasing challenges to the country.