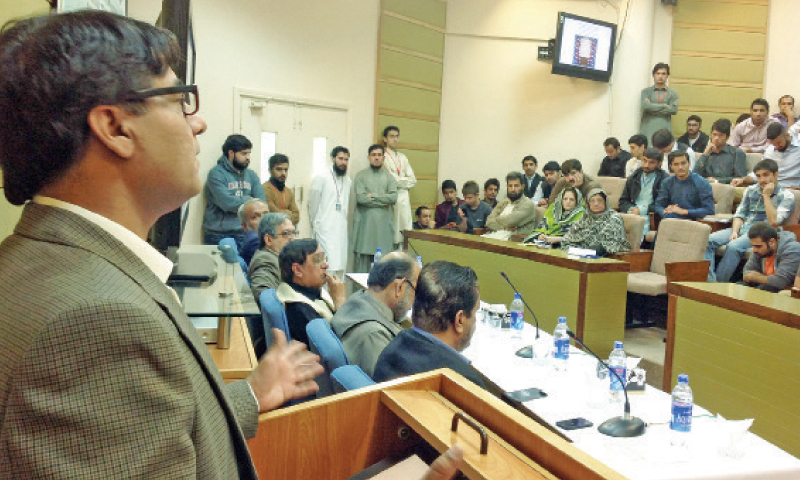 Speakers at a seminar here on Tuesday advised the business students to learn Persian language for the best prospects in the region.

The seminar titled ‘The role of Persian language for promotion of trade and cultural ties among Pakistan, Iran, Afghanistan and Central Asian republics’ was organised by Culture Centre, Islamic Republic of Iran, Peshawar.

The speakers said that students having proficiency in Persian language would achieve best business career in future if ties among Pakistan, Afghanistan, Iran and Central Asian countries were established. They said that Persian had deep influence on social and cultural life of people living in the region.

They called upon the students to learn Persian language so that they could know about history and cultural background of people, who spoke and wrote Persian and created the best of creative thoughts.

Dr Ali Yousafi, director general Khana-i-Farhang Iran, Peshawar while addressing as chief guest at the event pointed out that Persian could play an effective role in establishing business and trade ties among the neighbouring countries. He said that students having knowledge of Persian would be at great advantage. He added that language brought people together.

“Persian language could be used as the best vehicle to communicate with people in Iran, Afghanistan and other Central Asian countries. Business students should learn Persian along with other languages being spoken in the region for better career prospects,” the diplomat said.

He said that learning Persian language for business students would prove a boon as it would help them better understand of the people involved in trade and business. “People can be better understood if there is no communication gap among them. Language serves as a bridge and an important tool to bring people of diverse cultures, also business ties easily come through,” Mr Sarhadi said.

Dr Qibla Ayaz, former director of Institute of Islamic and Arabic Studies at University of Peshawar, in his paper said that there was a profound relation between trade and language. He said that role of Persian language was relevant and essential for promoting business in the region.

“Learning Persian could be helpful even in bringing peace and prosperity,” he said.

Dr Sarfaraz Khan, former director Area Study Centre, University of Peshawar, also stressed the need for learning Persian language. He said that Persian had been lingua franca of the whole region for centuries. Persian, he said, was not only language of knowledge, literature and culture but also language of the market in its heydays. He said that Persian had been a great source of all conventional disciplines of knowledge. Learning Persian would be an asset for business-students, he said.

Students should focus on gaining proficiency Persian language, if they could do it, business-students would get an easy access to half of the central Asian countries along with Iran and Afghanistan, Mr Khan said.

Dr Mohammad Ali, acting director of Institute of Management Sciences, said that learning languages was a must for business students. The best communicative skill was vital for business career, he added.

He said that 60 per cent poetry of Allama Iqbal was in Persian language. “Iqbal chose Persian for his creative expression because he thought his lofty-thoughts could match only Persian language. Business and trade could be promoted and people to people contact could be established through removing language barriers,” Mr Ali said.