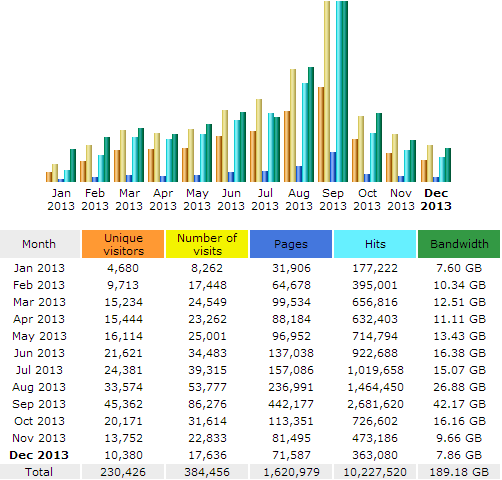 Got some spare time from busy schedule and want to highlight some trending news & stories, yearly statistics and website performance for 2013. Let’s start from some trending topics which were discussed deeply in thePeshawar.

KPK laptop scheme was the core topic discussed this year. CM Amir Haider Khan Hoti (ANP) inaugurates Naway Sahar Laptop Scheme in Peshawar. Though the scheme was quiet successful but some Students protest against ‘unfair’ distribution of laptops. Some students sold their laptop on olx and local markets as they already have, a statement were made from the department that Students Selling Laptops to be Punished.

Hamza Khan, 1st year pre-medical student of Edwards College Peshawar committed suicide due to a letter written to his father about the absentees of his son from collage in February. Sources said that principle of Edwards Collage Mr. Titus wrote a letter to his father that he had 52 % attendance and threatened that his son would not eligible to sit in exam after receiving the letter to the father of the deceased the student committed suicide.

Prof. Dr. Ajmal Khan, who is in Taliban captivity from 3 years. The issue is still pending after countless request from Ajmal Khan to govt. Taliban demanded their arrested colleague to release by the govt in order to let Ajmal Khan.

It was September 8, 2010 when the Vice-chancellor of the Islamia College University (ICU) Ajmal Khan was kidnapped from outside his residence in the Professors Colony near the campus of the University of Peshawar. The government has failed to ensure the safe recovery of the missing official even over three years of his kidnapping.

Islamia College Peshawar 100 years celebration was suppose to be celebrated in Oct-Nov this year. But due to some internal issues and political interference the event was postponed. Some students protested on facebook indicating that VC Rasool Jan failed to held 100 years celebrations as he was sighted in Golden Jubilee of University Public School Peshawar this month. Students society of ICP held a Gala which was appreciated by the management and students from other institutes.

We have got countless feedback & suggestions this year as students starts participating in various stories and academic activities in our website. As a result following are some statistics of visitors for the year 2013. September 2013 we were flooded with 45.3K visitors due to B.A/BSc result of Peshawar University. It is not strange that that graph descend again to 10K at the end of this year because normally students are visiting our site on various academic events like admissions, results or datasheet.

As a result 230,426 unique visitors were served this year and round about 190 GB data were downloaded.

We are glad that a team of admin are working 24 hours on facebook to provide value-able information to student’s queries. We hope to make the platform more useful for students. In order to get the community more wider, we need your feedback, suggestion & contribution. I would like to invite all students to take participation in our notes/papers section which would be beneficial for others to download local stuff easily.