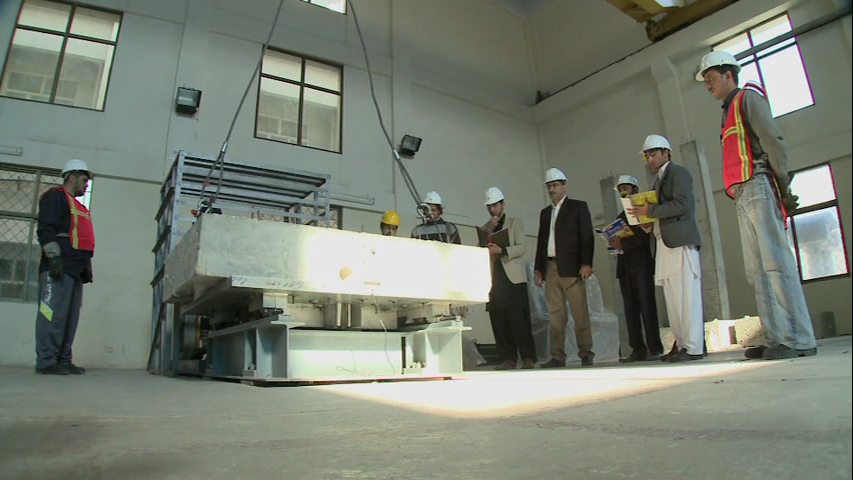 The University of Engineering and Technology (UET) Earthquake Engineering Centre (EEC) has tested its newly installed shake table of 6X6 meter with a 6 degree freedom here on Tuesday.

As part of pilot testing, the shake table has successfully made its first-ever pilot testing in presence of the Vice Chancellor Imtiaz Gilani and other faculty members. Dr S.M. Ali, Director EEC and Prof Earthquake engineering said that the shake table is the state-of-the-art equipment recently installed by a team of international and local experts at the EEC. “Only four countries have got shake table of 6*6 m size in the world as after USA, France and Japan, Pakistan will be the fourth country whereas in the Asian region it is second after Japan,” he added, “The shake reinforced at 60 ft height can subject structures weighing 60 tons and will be used for geotechnical studies of large scale foundation models to investigate important problems in seismic designs and has been placed as per international reinforcement standards,” he said.

The EEC has been in operation since 2004 as a multidisciplinary research and education centre established with the aim to mitigate the seismic disaster risk in the province in particular and country in general. The centre has made tremendous progress so far in the last few years. It has been upgraded to the National Institute of Earthquake Engineering with the funding of Rs487.219 by HEC. It brings together under one roof an impressive array of test equipment for specialized research on earthquakes and their effects on structures and various fields.

Dr Ali said shake table tests are equally mandatory in normal and disastrous situations and its application is cross cutting. From structures such as dams, bridges to buildings, it can be of great help for the telecommunications, power generation, and nuclear sector and geo technical fields as well.

He said earthquakes are common but the damage suffered during earthquakes becomes huge due to lack of proper civil engineering facilities in urban areas and improper understanding of ground behaviour.

Citing the recent earthquake took place in Awaran (Baluchistan, September 26th 2013), he said just after the devastative earthquake, the communications systems broke down which not only delayed the emergency relief services but affected the rehabilitation process of victims for several days.

Similarly, it is important that hospitals remain safe and operational for receiving casualties in such occasions. In this respect the centre has developed research collaborations with renowned international organizations, research centres and universities for human resource development, research and development activities.