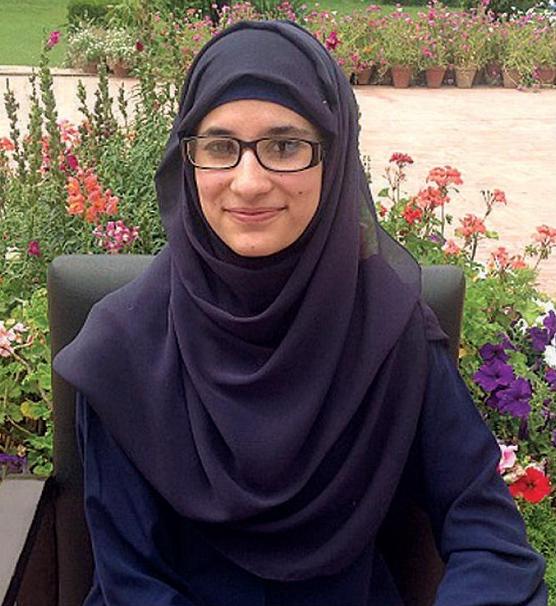 Neelum Afridi, a resident of Bara in Khyber Agency, is a born poet. Her family was shifted to Peshawar before her birth. She grew up with a dream to set up a school in Bara, her hometown beleaguered by militants, and to become voice of tribal women.

Graduated from Army Public School (APS), she remained the top debater and magazine writer during her stay at the school. She had her maiden poem published in English in APS school literary magazine when she was student of 7th grade.

Ms Afridi composed her first poem in Urdu when she was a third grader. She is recipient of numerous awards for poetry, essay writing and declamation contests at regional and national levels. In addition to English, she also writes poems in Urdu and Hindko.

The young poet said that she launched her own blog where she kept posting her articles and poems. She said that she was getting encouraging response.

The first to hit were all the girl schools in and around my village. I would scribble down the horrible incidents that wreaked havoc on my people especially those young girls, who were deprived of their schools. This very thought became a launching pad for my poetic vision, she told this scribe.

When APS tragedy took place on Dec 16, 2014, Ms Afridi composed more than 20 poems to versify different aspects of the unfortunate incident. `Being a sensitive soul, I wept and wept and finally my tears rolled into scores of poems. My poetry and fiction have roots in tragedies more than romantic frivolities. I think I should use my talent for voicing issues of womenfolk,` she said.

Ms Afridi is a student of English literature in BS programme at Islamia College University. She is also stage secretary of Young Women Writers Forum (YWF),launched in May 2014. She said that she wanted to become a social activist to raise voice for the rights of tribal women.

`When five years ago I visited my village, I witnessed destruction all round. Being helpless I found everybody voiceless including women, who were in great distress. I wrote a poem titled `Silence` addressed to all the socalled powerful individuals, who had adopted criminal silence over the devastation,` she recalled.

What she could, she said, was to get connected to social media and kept posting her poems and prose pieces. Although her mother was reluctant, yet her father Janbaz Afridi, a doctor by profession, granted her a tacit permission to compose poetry.

`I travelled this difficult journey on my own. I have written enough poems in English to be compiled into a book.

She said that she felt proud to say that Young Woman Writers Forum was headed by Marina Mehsud, a tribal girl from Waziristan Agency, who was also a poet and fiction writer. `We encourage young women to express their inner feelings in any language they want to and use social media in a positive manner,` the young poet said.

Ms Afridi said that tribal women were faced with many challenges but she was determined to play her role for the right of education for tribal girls. She has recently written a short story personifying school going girls into different colours. `Once I completed my education, I would go back to my village and would set up a school on the pattern of Islamia CoIIege, Peshawar where girls would get education without any fear,` Ms Afridi said.Dr Janbaz Afridi told this scribe that he had observed great talent and confidence in his daughter and was quite sure that she would materialise her dreams. `I strongly believe that tribal women, if provided with an opportunity, could do wonders. Neelum is full of dreams. She wanted to do so many things at a time and I wish she could realise her vision,` he said.