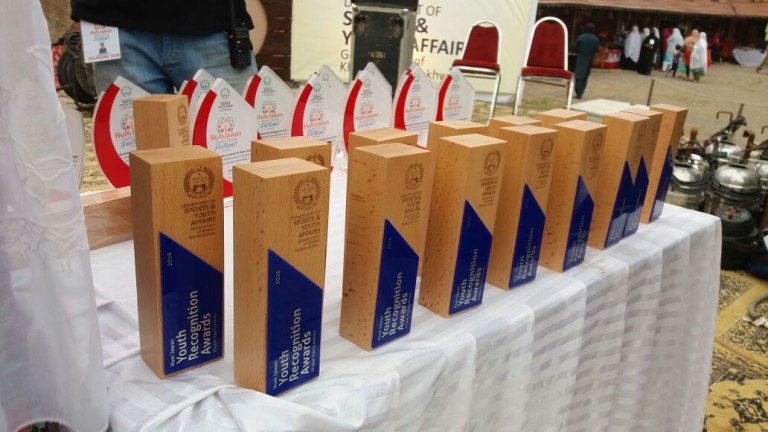 The Hum Jawan awards were conferred on the youth of the province who have excelled in different fields of life and rendered great services for the country and society.

The awards were given at the concluding ceremony of the two-day Hum Jawan youth cultural festival held at the PIA Planetarium in Hayatabad on Sunday. The Sports and Youth Affairs Department, Khyber Pakhtunkhwa, had organised the event to promote culture, heritage and history.

District Nazim Muhammad Asim Khan was the chief guest, while Deputy Secretary Sports and Youth Affairs Adil Safi and Youth Affairs Assistant Director Arshad Hussain were also present.The award in art and culture went to Khumariyan, a band of musicians whose tunes are based on their native music, with a tinge of other native music of the world as well. The band comprises of Farhan Bogra, Shiraz Khan, Sparlay Rawail and Amer Shafiq, who have performed at national and international level.

Sadia Umar, a poet, Dil Raj, a singer, Fareeda Irum, drama actress also received the art and culture awards.Mahnoor Jamal, aka Emjay, a young student of fashion design and a budding artist from Peshawar, is known for her beautiful portraits and stunning fashion illustrations won the creative artists award.

Others are Muhammad Rashid Ali Jadoon aka Rishi Jadoon, a creative graphic designer and photographer of Khyber Pakhtunkhwa and Yusra Baig, an emerging fashion designer, who received the awards.

Shahzad Haider, founder of Ranra Learning Centre, a library for garbage collectors, Aleina Ali Shah, a doctor from Chitral were given awards in education category. Rai Haris Manzoor, who made a record by passing the O-Level examination of the University of Cambridge at the age of nine years, Ibrahim Shahid, a world record holder with 23 A grades in GCE O-Level also received education awards.

In entrepreneur category, Darewro, a business venture by the fresh graduates of IMSciences Peshawar, Meena’s Delights, two sisters at a young age began an online business of desserts, cakes, cup cakes etc and in a very short span of time shot to fame, Savants Day Care & Learning School, is a child and family learning centre committed to nurturing the full capacity of children won awards.

Azizullah Khan, a youngest district nazim of Dera Ismail Khan, Murad Saeed, a politician, who was elected to the National Assembly in the 2013 general election from Swat, Tufail Anjum, the youngest MPA from Mardan, Bibi Jan, a young girl of Chitral who is often given the title of Female “Robin Hood” as she is the pioneer female who raised her voice for the rights of women received awards in politicians category.

Wadan, a group of youngsters from Peshawar, who made a Wall of Kindness, where poor gets clothes and other stuff for free, Mehreen Afridi, who has been nominated for the N-Peace Awards 2014.