Youth welfare: Books and pens, not (toy) grenades and guns 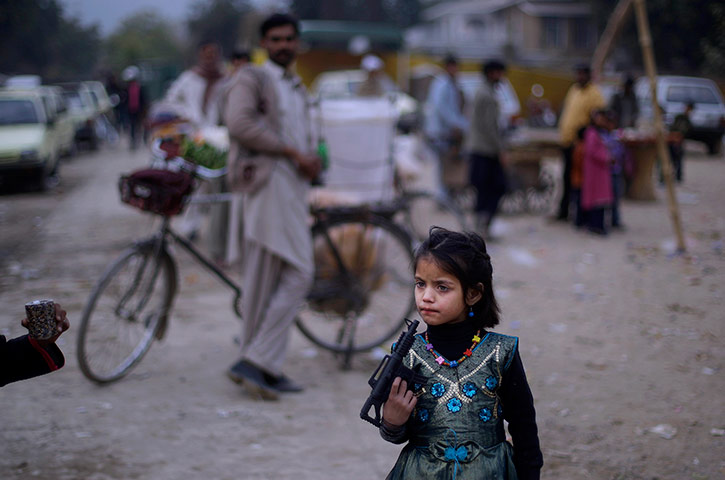 Lawmakers have demanded the provincial government to control the sale of toy weapons as such items can lead to violent tendencies in young minds.

The issue was raised by Awami National Party (ANP) MPA Mian Syed Jaffer Shah during the assembly session on Monday when he called attention to the proliferation of toy weapons in the market.

Shah demanded the government keep a check on the manufacture, import and sale of such toys.

Pakistan Peoples Party lawmaker Nighat Orakzai backed Shah and demanded legislation on the subject. Throwing his support behind the cause, ANP parliamentary leader Sardar Hussain Babak pointed out firecrackers, toy Kalashnikovs and pistols are “emotionally and physically dangerous for children.” Instead, children should be given books and pens, said Babak.

Proposing joint legislation, Minister for Communication and Works Yousaf Ayub said a majority of these were smuggled items of Afghan Transit Trade.

Opposition members went on to criticise the government over the delay in appointing standing committees and chairs for the District Development Advisory Committees.

MPAs also deliberated on how to ensure hides of sacrificial animals do not fall into the hands of unwanted elements on Eidul Azha. The issue was raised by Babak who feared the money generated by the sale of hides will be used to further destabilise the region. He asked the government to monitor the collection on Eid day and requested religious scholars to guide the public on the matter.

However, Minister for Auqaf and Religious Affairs Haji Habibur Rehman expressed his displeasure over the issue, arguing the skin is usually given to welfare organisations.

Hides are a big source of income for those running social reforms programmes, noted opposition leader Sardar Mehtab Ahmed Khan. He asked the government to raise awareness on the topic so the public refrains from donating to organisations conducting suspicious activities.

The K-P Local Government Bill 2013 and Ehtisab Commission Bill 2013 were also laid before the house. Other issues discussed included the regularisation of private schools, commercial activities in residential areas and access of inmates to prohibited items. The session was later adjourned till Tuesday afternoon.