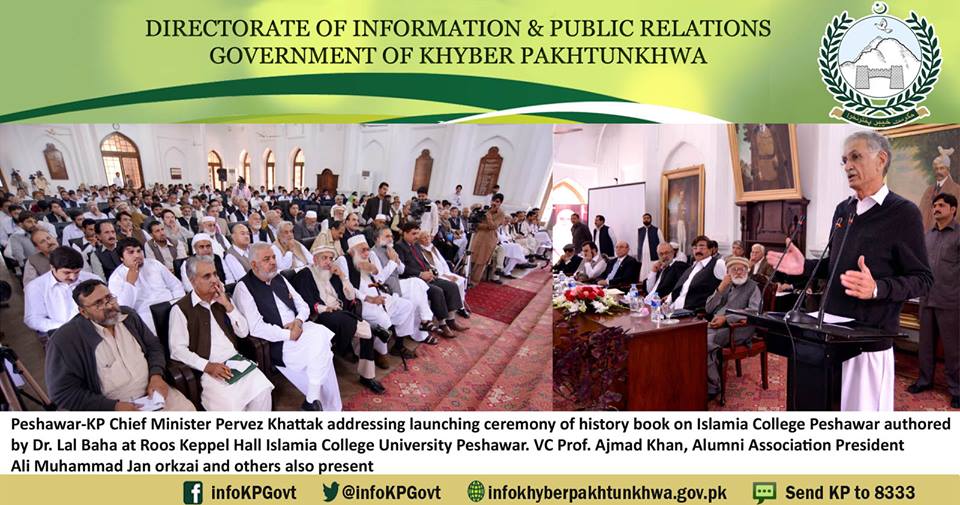 The KP Chief Minister Pervez Khattak has declared that a New KP could not be built through highways, bridges and high rise buildings but it could be done through a system and strengthening of institutions that could deliver to the masses especially the poor. He said KP needed a system with inbuilt capacity to resolve the people’s grievances without the support of influential. He said we are endeavoring to give our people a transparent system based on supremacy of law, merit and justice so that our youth had maximum opportunities of demonstrating their talents and capabilities.
He was speaking on the occasion of the launching ceremony of book on Islamia College Peshawar authored by Dr. Lal Baha at Roos Keppel Hall of Islamia College University Peshawar. Vice Chancellor ICU Prof Ajmal Khan, Senior Alumni Association President and Ex Governor KP Ali Muhammad Jan Orakzai, Vice President Muhammad Zaman, General Secretary Col ® Jameel, brother of late Dr. Lal Baha and Alumni Member Dr Mashooq Ali also spoke on the occasion. The speakers highlighted different aspects of the book and the college. They also thanked the Govt of Khyber Pakhtunkhwa on the revolutionary reforms in various departments and social sectors as well as assured their fullest cooperation to the Chief Minister in this respect. Also present on the occasion were besides large number of teachers and students of the University
and affiliated educational institutions, provincial Minister Excise and Taxation Mian Jamshedud Din Kakakhel, Advisor to CM on Planning & Development Mian Khaleequr Rehman and Special Assistant to Chief Minister on Transport Haji Fazle Elahi.
The Chief Minister while appreciating the history work of Dr. Lal Baha said that this book has paid penance of the soil. He said the Islamia College Peshawar and the affection of the people to this college has become part of the history and culture of this province. He said Islamia College Peshawar is one of the parent institutions of setting the foundation of higher education in this province. He said the college opened in 1913 and now it has become a university and many schools and colleges are born of this parent institution, but in fact Islamia College is still serving as the mother of all institutions in this region.
Pervez Khattak announced an academic block, a library, hall and hostel for Islamia Girls college, a new hostel for Islamia boys college, an ambulance for Islamia Collegiate School and also an overhead bridge on the adjacent Jamrud Road for convenience of the students. He also assured his full support to Islamia college university and its affiliated institutions on their needs and also clarified that in achievement of academic objectives, funds will never become hurdle from his government. He said that PTI led coalition government has removed the double standard in educational system and has implemented English language as the medium of instruction throughout the province. This will, he said, ensure that standard of education remain the same for everyone irrespective of their social and economic class and our youth will participate in a national spree and will be ready to face global challenges. He further said that in this province we will not just erect structure in the name of schools and colleges but will in true meaning create educational, research and innovation based institutions that will have its excellence in both science and technology and Arts and Heritage.
The Chief Minister along with Prof. Ajal Khan and Ali Muhammad Jan Orakzai visited Isamia Girls College and its proposed sites for Academic Block and Girls Hostel. The College Principal Prof. Zahir Shah told the Chief Minister that the girls college was started in the abandoned dispensary with 59 students has now more than 250 students and that is precise reason that they need more class rooms and other spaces.