According to the public notice which was issued by the FPSC, the exams will be conducted in 21 cities of Pakistan. Following are some centers listed for Peshawar, if you know more about centers feel free to contribute here. Public Service Commission Hall, Peshawar Cantt KIPS, Mulbery Road, University Town, Peshawar For further information you […]

CSS exams 2013 will be held in the month of February as usual. There are two kinds of different tests were taken one in written test and the other is interview of the candidates. CSS written Result 2013 information will be given later at this page after the commencement of the CSS exams 2013. Every […] 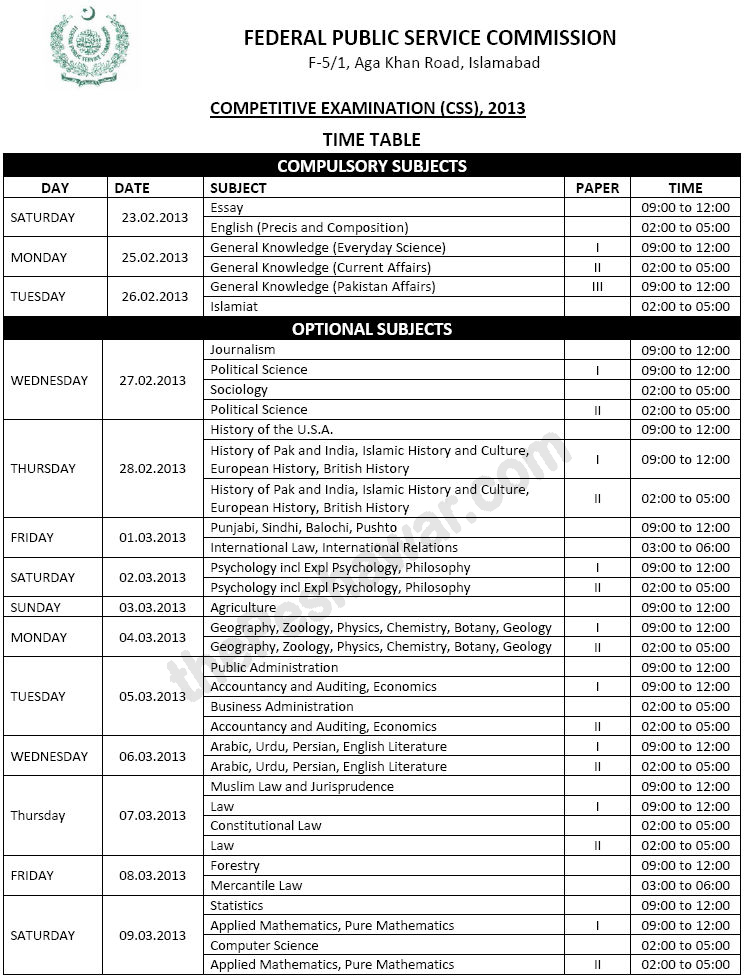 Only the payment has been made, the next step is preparation for the exam courses. The six compulsory subjects which comprise 100 marks each are namely Essay, English (Précis & Composition), Everyday Science, Current Affairs, Pakistan Affairs, and Islamiyat. Optional courses can be selected from any group, ranging from A to I given below. Every […]

For students, who intend to prepare without the help of academies, studying at a library can be of benefit due to the availability of reference material, books, and national and international journals. Also, the chances of distraction are quite low in this case and the environment makes the library a sound place to study. A […]

Age Requirement All candidates must be between the ages of 21 to 28 years of age to take the CSS examination. In January 2011, Prime Minister Yousaf Raza Gilani rejected an appeal by the Establishment Division to increase the upper age limit of eligibility on grounds of the fact that the examination must only be […]

Candidates, who fall into the eligibility requirements stated above, can apply for the CSS examinations. CSS exam applications will be invited all over Pakistan in the month of November or December every year. Federal Public Service Commission of Pakistan (FPSC) mostly conduct the CSS Exams in month of February every year. Government employees who fulfill […]

Pakistan is in dire need of intelligent, academically sound and knowledgeable leaders, and political representatives, who can take decisions on behalf of the people, in light of their commendable qualities. As a result the providers of civil services in the country are selected via an examination, now formally known as the Central Superior Services of […]