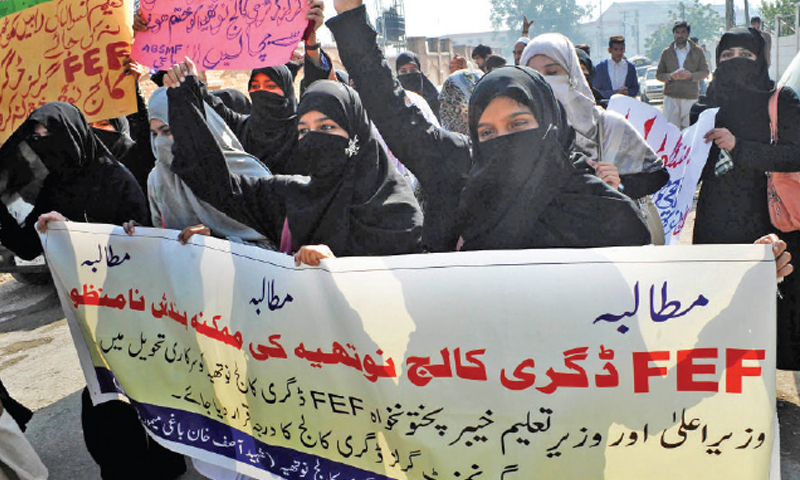 One hundred and nineteen girl students of the Frontier Education Foundation Degree College, Nauthia, on Monday threatened to agitate and even discontinue education over the possible closure of their educational institution.

They demanded the education department to take the college into its supervision to save their future.

The students accompanied by their parents told reporters at the Peshawar Press Club that the FEF administration was bent on shutting down their college before shifting them to Dabgari College against their will on the plea that enrolment rate was dropping and its expenses were increasing.

They said the number of students decreased as all science teachers had been transferred and that students were asked to go to Dabgari college for taking classes of computer science and other subjects.

The students said the annual fee had been increased from Rs5,000 to Rs16,000 and from Rs7,000 to Rs20,000 for different categories forcing many of them to move to government-run colleges.

They said under a conspiracy, the college was being closed down so that its buildings could be used for other purpose.

Parents of the students said they won’t send their daughters to Dabgari college as it was located away from their houses.

They said the decision to close down the college in their area was meant to deny education to girls.

The parents appealed to Chief Minister Pervez Khattak to take notice of the issue so that unrest among them could be removed.

They said education in the province had adversely affected by militancy, inflation and poverty and that the FEF management was bent on creating problems for students and them.

The parents warned they would move court for relief on the matter.