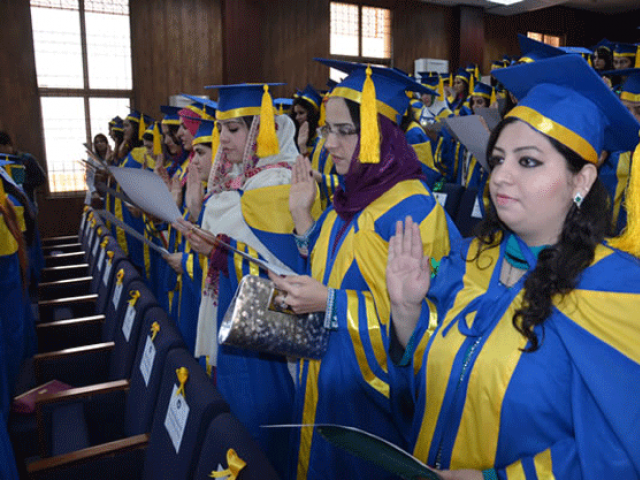 At least 67 students from Khyber Girls Medical College (KGMC) in the provincial capital were awarded their medical degrees on Saturday.

“I have both good and bad news for you,” he said. “The good news is that you are now professional. The bad news is you’ll need to work extra hard as doctors.”

Hafizullah urged graduates not to doubt themselves and continue working towards excellence.

According to Hafizullah, the medical profession is dominated by women and said they should be encouraged to continue working in this field.

“I have no words to explain how happy and proud I feel today,” said Munazza Ayub, a KGMC graduate who bagged eight gold medals.

Hailing from Hangu, Ayub plans to specialise in gynaecology and obstetrics. Speaking to The Express Tribune, she urged the government to focus on educating girls so they have equal access to opportunities.

“During the decade, we have started an MPhil programme and established a research laboratory,” said Dr Abid Hussain, the college principal. “We now want to start a dental section of the KGMC as there is only one public sector dental college in the province.” The principal said the number of seats at KGMC will be increased from 50 to 100.

Hussain requested Governor Mehtab Ahmed Khan, who was a chief guest at the event, to establish a quota for children of employees and construct a residential colony for faculty members.

Mehtab said he would try to ensure these demands are met. The governor announced a grant of Rs1 million to the Staff Welfare Society at KGMC and Rs10,000 to each student who obtained gold medals for academic excellence.