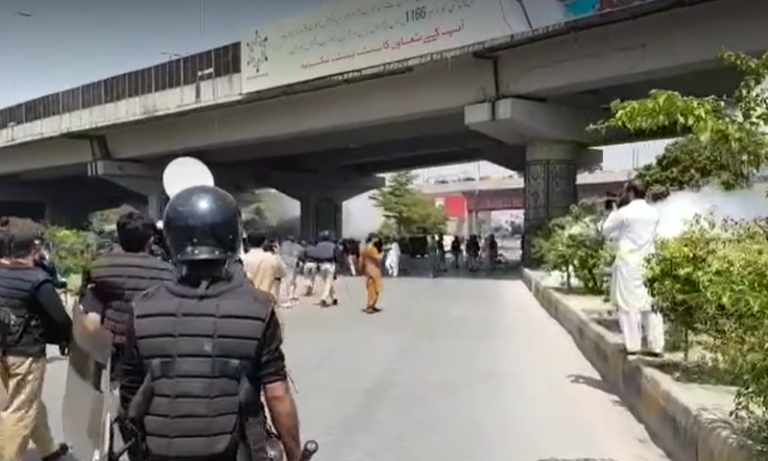 Police in Peshawar fired tear gas and baton-charged government teachers protesting university reforms, which include a reduction in allowances, in front of the Khyber Pakhtunkhwa Assembly on Monday.

At least eight of the protesting teachers were also detained, police officials said, adding that they were held for blocking the road.

Peshawar University Teachers’ Association (PUTA) President Fazl Nasir was also among those detained and allegedly beaten by the police.

Peshawar SSP (Operations) Yasir Khan Afridi said that citizens had the right to a peaceful protest and police do not take action if the protest is peaceful and limited to a side of the road.

“If the protest inconveniences citizens, then the law will come into action. The [educated protesters] had blocked the road. Routes leading to hospitals were closed, causing trouble for people,” he said.

The official said the protesters dispersed soon after the police action and the road was cleared for traffic.

However, head of the Federation of All Pakistan Universities Academic Staff Associations (FUAPASA), Dr Shah Alam, said the protest would continue until the demands — withdrawal of proposed reforms, including a reduction in allowances of university employees, ending free education for their children and establishment of a provincial chapter of the Higher Education Commission (HEC) under the 18th Amendment — were met.

“When provincial [chapters] of the HEC are present in Punjab and Sindh then why not in our province? The provincial government has reduced the higher education budget instead of increasing it,” he lamented.

The protesters, who include university teachers from across the province as well as other government employees, had been demonstrating for the last five days.

On Monday, they gathered in front of Peshawar University and marched towards the KP Assembly where they blocked the road.

A university official, who asked to be named, told Dawn.com that the KP government had directed universities to reduce expenses and generate finances using their own resources after which a comprehensive set of reforms were readied.

The proposed reforms were going to be discussed and a budget approved in a meeting of the Peshawar University syndicate two days ago, he said. However, PUTA approached the Peshawar High Court and got a 14-day stay order due to which no final decision was made, he added.

Meanwhile, KP government spokesperson Kamran Bangash said “some elements were wrongly attributing” the protests to policies of the provincial government. Instead, the situation was created due to “bad decisions” taken by university administrations and “[lack of] responsibility” by the HEC, he claimed.

“KP govt, despite meagre resources, has come to the rescue of Universities in the past, is doing, & will continue in the future but Universities [are] required to put [their] house in order. If reforms aimed at financial discipline aren’t implemented, the situation will be hard to sustain,” he tweeted.

1-
Some elements are wrongly attributing the present crisis to the decisions/guidelines of KPgovt for ameliorating the situation. In fact it is due to bad decisions by the Uni Administrations coupled by shrugging the responsibility by HEC in their Ordinance of 2002

Earlier this year, hundreds of teachers of government schools had blocked Peshawar’s Khyber Road to press the government to upgrade their pay scales.